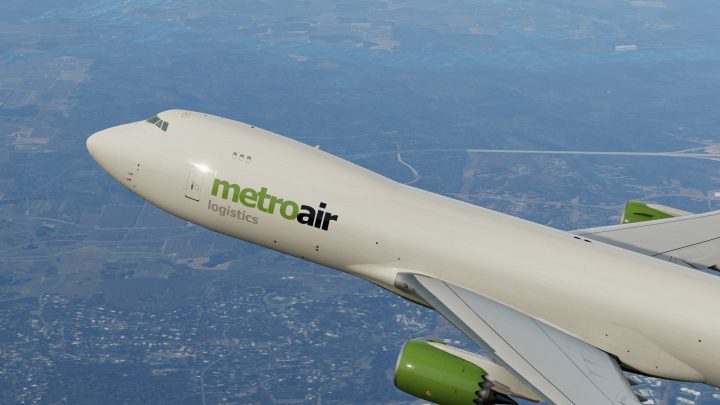 Kansas City, KS – In an unexpected move MetroAir Virtual Airlines has today unveiled its plans to launch a new Cargo Division, MetroAir Logistics later this year. The news broke at a press conference being held at the airlines headquarters on April 1st 2022. Over the last 15 years, Metro has always played down the importance of cargo operations in its business model and has instead always focused on providing a superior passenger experience.

The airlines Chief Executive Officer, William Hogarth said “We all saw what an important role cargo operations have played over the last 2 years as a result of the COVID-19 pandemic. We also saw the significant disruption that was caused to the global supply chain as airlines and operators scrambled to pick up on the huge demand. We have decided that now is the time to roll out our own cargo division that can be on hand 24hrs a day to keep the supply chain moving.”

The press conference went on to detail the airlines plans for its new cargo operation: A new base will be established at Charlotte (KCTL) North Carolina in early April 2022 and the airline will take delivery of new dedicated freighter aircraft direct from the Boeing Factory. It is understood that the new cargo fleet will consist of B747-8, B777-200F & B737-800BCF aircraft that will fly initially to cities within the USA and Caribbean.

The airlines new Cargo Operations Director, Jamie Milton said “We looked at many other locations to base our cargo division , particularly at our current hubs and focus cities. However Charlotte provides the room, infrastructure and capabilities that MetroAir needs to launch the new logistics division.”

The new division is set to create more than 500 new jobs at Charlotte Airport as well as positions across the companies network. It will also help to drive up revenue and profitability of the airline which has suffered like many others as a result of the COVID-19 pandemic.

It is expected that the new cargo operation will launch in mid to late April initially serving 16 routes.

The fleet will consist of 10 Boeing 737-600’s acquired from the former BlueSquare Airlines. The planes are currently re-fitted with all new seat-back entertainment, larger overhead bins for carry-on bags, and the industry’s fastest available in-flight WiFi to keep business travelers in the loop for the duration of their flight. The planes will have a total of 8 MetroAir Prime seats available, along with 100 Economy seats.

MetroAir Shuttle will have a total of 17 flights out of Boston Logan International (BOS), with destinations including; Chicago (ORD), New Yorks’ JFK, Toronto, Baltimore, Philadelphia, and Washington DCs’ DCA. While at MetoAir’s west coast hub, the Shuttle brand will have an additional 15 flights out of Los Angeles International (LAX), serving Las Vegas, Santa Barbra, San Francisco, San Diego, Phoenix, San Jose, Fresno, and Bakersfield. Plans are in the works to serve the state of Texas as well, with flights out of Dallas (DFW) to Houston, Austin, San Antonio and New Orleans.

MetroAir’s Sean Mullineaux had this to say. “By flying bigger jets with a signature interior that includes more premium seating, Metroair will give customers more choice when selecting their onboard experience and better meet the demand among business customers. The Embraer 170 didn’t have the space for the desired outcome”. William Hogarth added, “With MetroAir Shuttle, we are now able to increase the total number of available seats by almost 39% to our most popular and profitable destinations. While increasing passenger comfort and business accessibility.

Reposition flights will begin on August 1st, 2021, out of Phoenix where the aircraft have been stored. Scheduled service will begin August 14th.